A unique dynamic is unfolding in the European cannabis space. It was already underway before coronavirus arrived, but has now been entrenched since the pandemic. As officials aren’t able to travel and conduct critical audits of cannabis cultivation facilities, only those companies with an EU-GMP certification can do business in Europe and supply cannabis.

Related: Coronavirus Pandemic Could Delay Cannabis Legalisation in Europe and the US

Any company that earned this stamp of approval in 2019 now has a slight head start. One such company is Khiron Life Sciences Corp., a firm that is headquartered in Columbia but has outposts around the world.

How to enter the cannabis market in Europe

Last year, a major theme was the repeated attempt from various firms to enter the supposedly ‘booming’ European cannabis market. It seemed only a matter of time before accommodating legislation would fall into place.

Unfortunately, this hasn’t happened as quickly as predicted. Instead, legal processes were slowed, and a broad cooling of the market occurred. It soon became apparent at the beginning of 2020 that many of the Canadian powerhouse firms were running into liquidity problems.

The steep drop in March only aggravated an already bleak financial picture. However, despite a more modest outlook, a few determined cannabis businesses are still eager to set up shop on the European continent.

These firms are currently pursuing the medical marijuana and cannabidiol (CBD) sectors, as they are the only two verticals that are available. The limited business arena also means that both verticals are incredibly competitive.

The CBD industry has been the most saturated. And, with little regulations or clear standards, it seemed like anyone could start CBD skincare, edibles or essential oils businesses in Europe.

Eventually, Europe had a mixed bag of cannabis-related companies, with some supplying high-quality CBD products and some downright dangerous ones, according to some experts.

Though they will soon leave the Union, Great Britain took a firm stance on this growing grey market. The Food Standards Agency (FSA) declared that members of the CBD industry must submit their novel food applications before March 31, 2021. If they fail to do so, European cannabis businesses risk having their CBD products pulled from shelves.

Related: Why the UK CBD Market Shouldn’t be Ignored Any Longer

They also advised citizens of the potential risks behind the compound, recommending ‘no more than 70mg a day (about 28 drops of 5% CBD) unless under medical direction.’

Elsewhere, in Germany, conversations have been further muddied by poor communication from advocacy groups like the European Industrial Hemp Association (EIHA). In March, the group announced that the German government had lifted the country’s novel food regulation in regard to CBD. This declaration came under close inspection until it was ultimately deemed untrue.

Businesses working in the medical cannabis area of the industry are under different conditions. Unlike CBD products, medical cannabis faces a strict regimen of licensing, even in the most liberal countries. These forward-thinking countries are, however, leading the conversation on all things pot.

France, the Netherlands, Germany, Austria, Switzerland and Denmark are currently dominating the medical space thanks to flexible regulations. 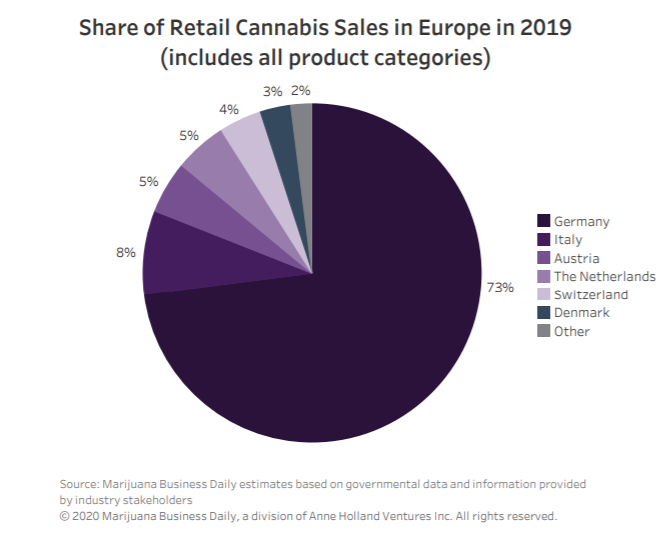 Of these countries, many are also actively pursuing trials with eligible medical patients. The diseases and cannabis use cases are varied and well documented. Trials are essentially putting two and two together for a large, scientific community.

For instance, in France, 3,000 eligible patients will soon be allowed to consume state-sourced cannabis for two years. They will report to a specialised medical professional, and the results of this trial will then dictate legal action from the state. In the best-case scenario, France will follow Germany’s lead and legalise medical cannabis.

The French cannabis experiment has, unfortunately, progressed very slowly. Due to the amount of red tape surrounding the process, it has been necessary to include an array of legal professionals and politicians. Amid a pandemic and strict lockdown measures, this has been slowed further.

Like the CBD industry, significant steps in the medical cannabis space appear limited, at least until the coronavirus worries dissipate. Any company or initiative that had gained momentum before the crisis is thus in a unique position.

Medical patients throughout Europe still need critical cannabis medicines, and ongoing trials need it to carry on. That being said, at the moment, the demand for cannabis far outweighs the supply in Europe.

The slow and steady work behind European cannabis

The only cannabis companies that can serve the European market are those that have earned the coveted EU-GMP certification. This certificate confirms that cannabis cultivators have met a certain, high standard in terms of production measures.

The European Medicines Agency (EMA), the agency that facilitates this certification, ensures that the medicine in question will serve its intended purposes.

Part of the application process for earning this certificate means that the EMA must come to a cultivator’s facilities. During these in-person audits, it can scrutinise the production standards. Unfortunately, this critical step has been put on hold due to the latest pandemic. The agency stated:

‘For new sites and facilities within and outside the EEA [European Economic Area] that have not been inspected or where an inspection is required, a remote inspection may be carried out. On-site inspections will resume as soon as feasible.’

One can imagine this as a limit on the supply side of the cannabis equation in Europe. The same cannot be said about the demand side, however. For firms like Khiron Life Sciences, this dynamic has been a blessing.

In an interview with Strain Insider, Tejinder Virk, Khiron’s European president, confirmed that complying with EU GMP standards is a focus, and initiated preparatory audits in December 2019. Though the timing was pure chance, the team isn’t looking back on their good fortune.

Based in Columbia, Khiron is quickly becoming a household name in the cannabis community. They’ve brought on prominent executives like the ex-president of Mexico, Vicente Fox, and have served local medical vendors throughout the country.

The company is vertically-integrated with various clinics around the country, and Khiron has been essential in filling medical cannabis prescriptions. It has been from this success in Latin America that the team will also be supplying cannabis for Project Twenty21.

The UK-based endeavour seeks to enroll 20,000 patients into the program to better understand the effects of cannabis in medical settings. Relevant maladies include epilepsy, pain, sclerosis, Tourette’s syndrome and many others. Upon Twenty21’s launch in November 2019, Khiron quickly joined.

‘Khiron learned about [Twenty21] and were compelled to join, given the expansive goals, structure, and people involved. We were particularly interested in working with Professor David Nutt at Drug Science, who is one of the leading members of the medical community in the UK.’

The Khiron team is optimistic about the results of the study, too. With so many patients and a data-driven team of scientists led by Professor David Nutt, the conclusion of Twenty21 will provide an outstanding body of evidence.

Already, the partnership is bearing fruit, as Khiron has been able to serve the first prescriptions via ‘a globally diversified supply chain, with the ability to source from North America, LatAm, and EMEA’, said Virk.

Not only will Khiron participate in the most significant medical cannabis registry in the world, but Virk and his team will also begin serving the booming German cannabis market this year. For the uninitiated, Germany has struggled to keep pace with a growing demand for medical cannabis.

Thanks to a partnership with Nimbus Health, Khiron’s EU-GMP compliant cannabis can help soothe such supply issues in Europe.

Though these developments may not convert to immediate success, Khiron is setting the stage for a very profitable 2021. Gaining compliance was just the first step. Now the partnership is beginning to deliver on its initial fortune.

And, with the World Health Organization’s (WHO) meeting upcoming to reclassify medical cannabis, Khiron is very well positioned moving forward.

The Legal Situation of Cannabis in Croatia

The Legal Situation of Cannabis in Greece