One of the most common tropes since the dawn of cannabis has been the plant’s effects on intelligence. These tropes often accompany smokey scenes of stoners in wood-panelled station wagons passing a joint and a bag of chips. Other stereotypes include the underperforming hippy student who is barely able to complete a sentence. The list goes on.

Related: The Effects of CBD on the Human Body

But how true are these clichés? How does cannabis impact your intelligence?

Now that cannabis has been steadily entering the mainstream culture, researchers have the opportunity to get a deeper look into the plant. And one of the first objectives is to answer the age-old question: Does cannabis make you less intelligent?

You don’t need to be a scientist to see the dulling effects of cannabis. Studies abound indicating slower reflexes, a shorter attention span and difficulties with memory. These issues also appear to linger long after the user has sobered up.

The cognitive impairment can last up to three weeks according to a 2011 study. Researchers wrote:

Even after 20 days of abstinence from cannabis, reports indicate that the ability to make choices and assess risk was dramatically impaired, which could be seen as cannabis impairing intelligence. Like most cannabis research conducted before legalisation, however, some of these results are unclear. 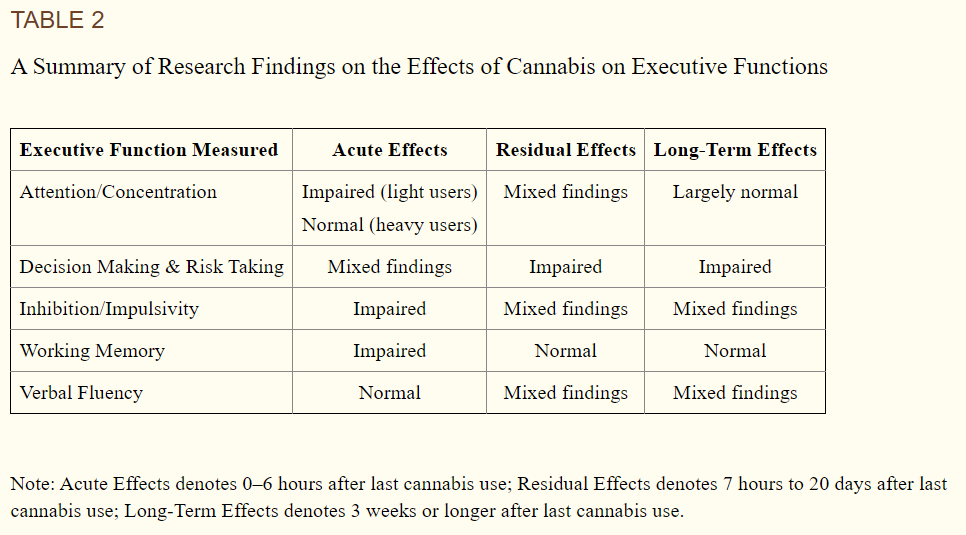 But, more importantly, one must ask if intelligence is defined solely by a person’s executive functioning. Memory certainly makes up this definition, but motor skills perhaps less so.

Another feature of this question demands clarity on the long- and short-term effects of cannabis. If the effects are only short-term, then the issue is much less concerning. Like alcohol, cannabis may only reduce mental functions temporarily.

A study from New Zealand in 2013 revealed, however, that long-term users are actually the most at risk of cognitive degradation. This study made up a portion of a much larger research trial called the Dunedin Multidisciplinary Health and Development Study, or Dunedin Study for short.

The project has been following 1,038 individuals for more than 45 years to test a variety of theses. It first began by simply monitoring child development and the health of young children between the ages of one to three years old. As ambition grew, and a controlled group had been established, this group of roughly a thousand individuals began participating in other, more nuanced research areas. One such area included the use of cannabis.

This cohort was tested for cannabis use five times at the ages of 18, 21, 26, 32 and 38. At age 13, researchers conducted a neuropsychological test, prior to the start of any cannabis use. The same test was conducted again at the age of 38.

The results paint a negative picture for long-term cannabis users, especially for those who began as adolescents. The study reports:

What’s more, these results were not nearly as negative for users who began smoking cannabis later in life. This would indicate, according to many experts, that cannabis use has a serious impact on the brain’s development.

In the case of cannabis use, there appears to be a direct connection between adolescent use and the formation of the amygdala. This region of the brain is responsible for managing our emotions.

Previous research indicated that the human brain completed the majority of its most critical developments around 18 or 19 years old.

A BBC report indicates that this timeline is actually much longer and that ‘there’s evidence of brain development well into early twenties and that actually the time at which things stop is much later than we first thought.’ Twenty-five is the new estimate, but researchers have said that development could continue into one’s 30s.

To sum this up, researchers have been wading through a variety of research topics. The first asks whether cannabis use has negative cognitive effects over the short-term. Data would suggest that this is indeed the case.

The second, and perhaps more critical question, is that of the long-term effects of cannabis use. Will smoking just one joint as a teenager affect one’s job prospects at 26?

The answers are nuanced, of course. Results would indicate, however, that regular cannabis use as an adolescent does have detrimental long-term effects on brain development. For those who begin smoking later in life, these effects appear trivial.

There is also debate in the scientific community about how one should test this thesis. In the Dunedin study, for instance, there is little concern for the environmental or inherited characteristics of each subject.

Twin design studies are popular because they help identify genetic inheritance and the immeasurable nature of family life. For cannabis studies, it has been incredibly helpful.

To begin the examination, psychologists measured the intelligence of two sets of twins from the age of 9 to 12 years old. They then performed the same test between the ages of 17 and 20 years old. In each set of twins, one of the twins reported cannabis use. And, like the Dunedin study, at the end of the study, researchers identified a decrease in IQ.

But unlike the Dunedin study, the researcher from Minnesota and California identified this decrease ‘in both the users and the abstainers.’ These results show that there are far more factors involved when measuring one’s IQ.

Related: The Dangers of Marijuana Consumption

At the minimum, these factors cannot be placed exclusively on the branches of the cannabis plant. Also, the sample size of this study was very low, which can severely skew results.

From this broad assessment, it’s clear that more research is desperately needed. This is certainly the case in the field of cannabis, but also in research conducted in psychology, neuroscience and child development.

With marijuana and its derivatives becoming more and more common in daily life, learning its effects, especially on those who may be vulnerable to any negative fall out, is key. This will help policymakers implement more precise laws, but it will also protect families and users from the potentially dangerous aspects of cannabis ingestion.

Like anything, moderation and education are key to enjoying life’s vices.

How to get Press Coverage for Cannabis Companies

The Legal Situation of Cannabis in Luxembourg