Cannabis beverages and consumables make up what many have described as ‘Cannabis 2.0.’ This wave of new products also promised to entice new and first-time users to try cannabis. A cannabis drink might interest people that wouldn’t be interested in smoking cannabis.

Related: ‘Cannabis 2.0’ Underway, What Will This Mean For Europe?

With more people joining, companies hoped that their declining sales and shaky futures would be rejuvenated. Unfortunately, this hasn’t panned out exactly as predicted.

In the following guide, Strain Insider will define the products that fall into this emerging category, go over a few of the technical hurdles in creating cannabis beverages and identify how companies are entering the niche.

Cannabis 2.0 products include edibles, beverages, vape pens, concentrates and topicals. Tetrahydrocannabinol (THC) versions of these products are currently only available in Canada and the United States, and they have only been made available recently. Elsewhere, like in Europe, consumers can only enjoy the non-psychoactive variety thanks to the rise of cannabidiol (CBD).

Canada launched its slow, regulated roll out of these products in December last year. This was primarily due to the difficulty of meeting local health standards, but also because of a health scare related to vape pens at that time.

Just a month before the Canadian launch, authorities in the United States identified vitamin E acetate, a compound that was mixed with cannabis oils in vape pens, as causing lung disease in users.

Despite these concerns, vape pens are currently the most popular Cannabis 2.0 product on the market. Though pre-rolled joints and dried flower remain dominant, the analytics firm Headset reported a creeping vape pen market share in Alberta, British Columbia and Ontario. 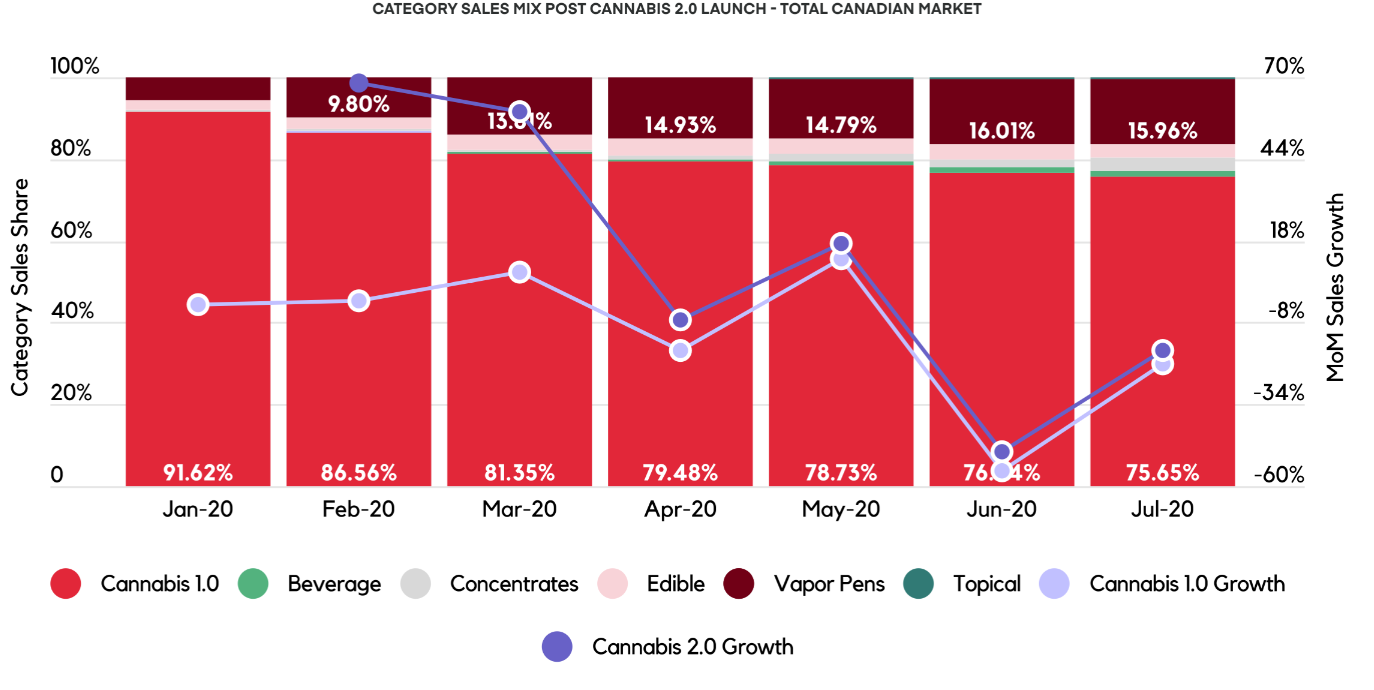 A similar trend is also visible in American states like Washington and Colorado. Each of these states has a well-developed cannabis market, as they were the first to legalise the plant. Headset indicates:

Though marijuana edibles and beverages have been hyped as one of the most exciting frontiers in cannabis, the data above indicates consumers are less than enthusiastic. There are several potential reasons for this. Just like smoking flower, vape pens are not as exotic as, say, a THC-infused sweet tea or an edible gummy.

This dynamic is the primary reason for the poor performance of cannabis beverages. Consumers simply haven’t encountered this product class before.

The vice president of communications for cannabis heavyweight Canopy Growth, Jordan Sinclair, said in an interview with The Verge:

‘The goal is to create a category. Before Red Bull, there was nothing like it. That’s what this looks like. It fills a new need.’

Before cannabis fills this need, however, it first needs to overcome two major obstacles: marketing and product.

Like potential consumers, many brands in the industry are still unable to articulate exactly what a cannabis beverage is. Some have argued that it will replace after-work drinks for consumers looking to wane off of alcohol. Others have described these beverages as a category in themselves, like kombucha. 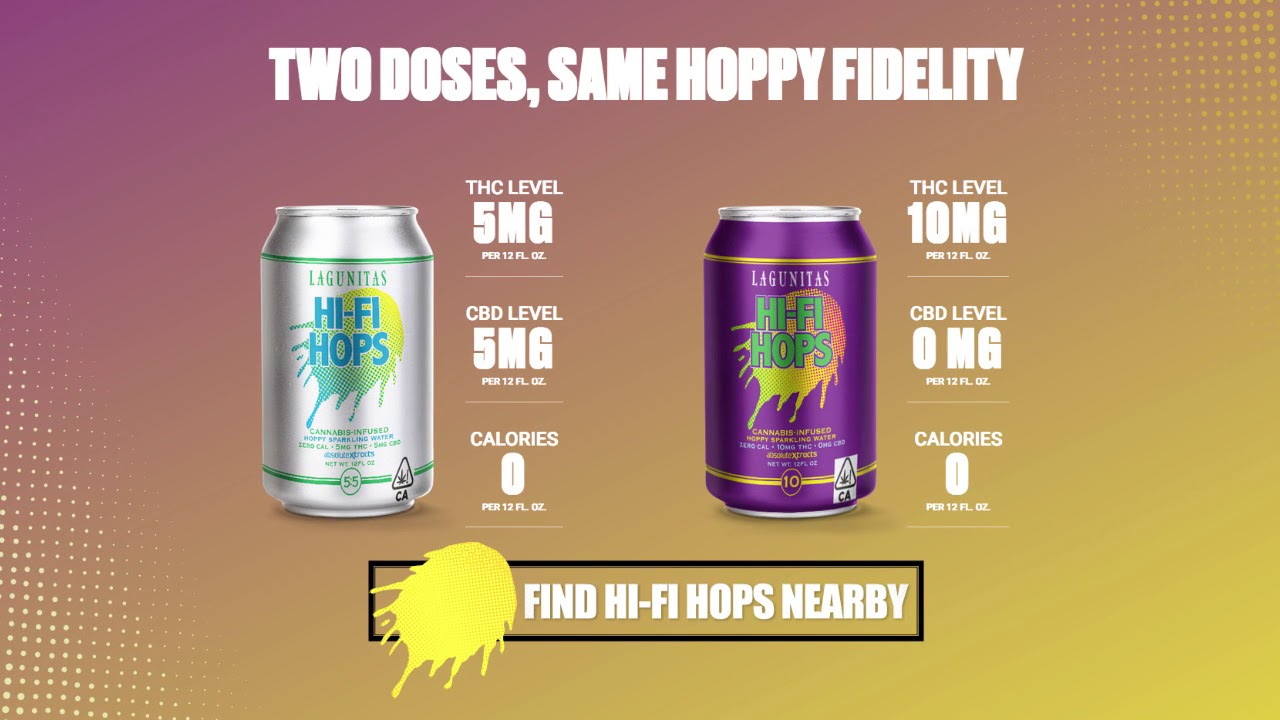 A clear trend is emerging: cannabis beverages are expected to replace alcohol. And, as larger beer brands move into the space, the trend will likely accelerate.

Constellation Brands, the company behind Corona, already owns roughly 40 percent of Canopy Growth, one of the largest cannabis companies in the world. Constellation’s competition in Molson Coors and Anheuser-Busch are cutting similar deals with Hexo and Tilray, respectively.

The second obstacle after the above-mentioned identity crisis is in the execution of the product. Unlike smoking, it is much more difficult to create a consistent high, palatable texture and pinpoint the correct dose for cannabis beverages.

Early trials of several cannabis beverages failed at either one or all three of these categories. In some cases, users felt little to no high upon drinking such a beverage, whereas other users were unable to finish a bottle or can due to being too high.

Like the cannabis brownies of yesteryear, even veteran users are wary of consuming a whole beverage in a single sitting. It can take anywhere from 30 minutes to two hours before the full effects of edibles are truly felt.

And, due to the composition of the cannabis extract, cannabis drinks can either have a lumpy texture or the THC and CBD compounds may not be evenly blended within the drink.

Making it through this murky landscape, however, comes with a hefty bounty.

A variety of predictions place the potential cannabis beverages industry in the multi-billions.

Grand View Research estimates the cannabis beverages market will be worth $2.8 billion (€2.3 billion) by 2025. The research firm, as well as cannabis firms entering the space, predict this growth will come from new cannabis users looking for healthy alternatives to smoking and drinking alcohol. 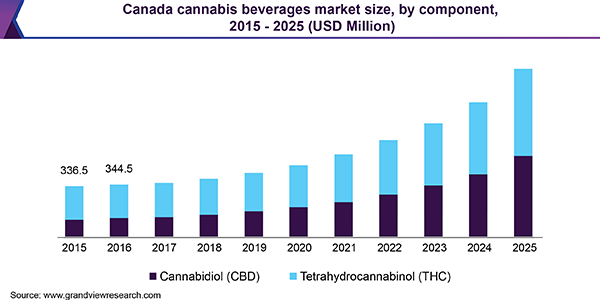 There is already a decline in alcohol and soda consumption, indicating a demographic eager for a new product. Key companies hoping to fill this need include Canopy Growth, Hexo, Aphria and many others.

So far, Tweed, Canopy’s cannabis beverage, has proven itself as a market leader.

In a conference call earlier this month, the CEO of Canopy, David Klein, told analysts that cannabis beverage production doubled in July, and will likely again double in August. Klein added that this growth will sustain as the company begins to distribute in the United States.

Of the Cannabis 2.0 products, cannabis beverages are currently the least popular. Vape pens dominate this sector, but mostly because they are far less intimidating. Unfortunately, this same dynamic is not true for emerging cannabis derivatives. Gummies and beverages are less than a year old, and there are still a variety of kinks to work out before they’ll become mainstream.

These issues include establishing a firm identity and delivering a high-quality product based on this identity. For now, large alcohol firms see these cannabis beverages as healthful replacements to beer and spirits. And, though the niche is nascent, green sprouts are already emerging. Tweed, as mentioned earlier, appears to have found a product-market fit.

Related: Cannabis Drinks — The Next Big Thing in Europe?

And, as Tweed and a few other products introduce cannabis beverages to a broader audience, more varieties will certainly emerge.

The Legal Situation of Cannabis in Malta

The Legal Situation of Cannabis in Slovenia