Throughout the world of business, mergers and acquisitions have seen a steady decline. This is due to the liquidity crunch and slowing economic machinery. With fewer people willing to take risks, investing in early-stage businesses has taken a major hit. Investments are down, and the cannabis industry is no different.

Due to the sheer amount of capital needed to support a large agricultural business, investments in the cannabis sector are especially thin.

The latest data does, however, show that in spite of the lockdown and quarantine, cannabis sales have enjoyed a healthy uptick. For the liquid investor, bold decisions could spell attractive payouts down the line.

So, where should this kind of investor be looking? What are the investments to look at in the cannabis sector?

As Strain Insider has mentioned time and again, investing capital upstream with producers and manufacturers is a regulatory maze. And once businesses make it through the licensing, audits and so on, success is far from guaranteed.

The number of marijuana growers in Canada, for instance, is so saturated that the price of cannabis has been steadily decreasing since 2010. This data is great for consumers, but not so much for producers looking for big returns.

With so much competition, the typical business model hinges on slow-moving technical developments. Companies like Aurora, Canopy Growth and Aphria are constantly on the hunt for improving efficiency and quality in every way possible.

These improvements needn’t be major either.

Lowering the cost of electricity, hydro, harvesting equipment or commercial real estate by even a few cents could have huge payoffs for cannabis companies. This is simply due to the size of each company’s marijuana growing operation. Conversely, falling beyond the technical curve could spell huge losses.

This analysis reveals some intriguing pieces of information for those interested in the cannabis business.

The first is that the first tier, that of cannabis cultivation and harvesting, is already dominated by battle-tested incumbents. Not only have they built a moat via a brand name, but they also enjoy a major head start in terms of capital invested. This leads to the second piece.

During Berkshire Hathaway’s annual shareholders’ meeting, Warren Buffett discussed the merits of businesses that don’t require too much capital to get started. The irony, of course, is that the Oracle of Omaha has famously invested in industries that do the exact opposite.

This fact can be seen in his investments in the textile, agriculture and energy sectors. Each of these investments demands constant inflows to maintain.

The other side of this bet would be the tech industry.

As the cost of building powerful, scalable software needs fewer and fewer moving parts to execute, companies building such software need far less capital over the long-term. These kinds of companies are all the more advantageous in current times.

Shifting to being a remote-first company is far easier for the Zooms and Facebooks of the world than firms like General Motors, for instance.

In a recent update on its strategy, Canopy Rivers, the investment arm of Canopy Growth, revealed some of the trends that it has been seeing. It wrote that ‘the impacts of COVID-19 were already starting to show, with PitchBook data showing both the number of deals and overall deal size decreasing amid economic uncertainty.’

Related: How COVID-19 is Making a Bad Year for Cannabis Worse

The investment company also indicated that the average asking price for companies had been cut in half.

Perhaps the most interesting insight, however, is the drastic change in the types of businesses that are approaching Canopy Rivers. Pre-pandemic, which is defined as before March 16, the top three types of cannabis companies included production and cultivation, consumer products and accessories as well as retail and distribution.

These days, the demographic has changed dramatically. 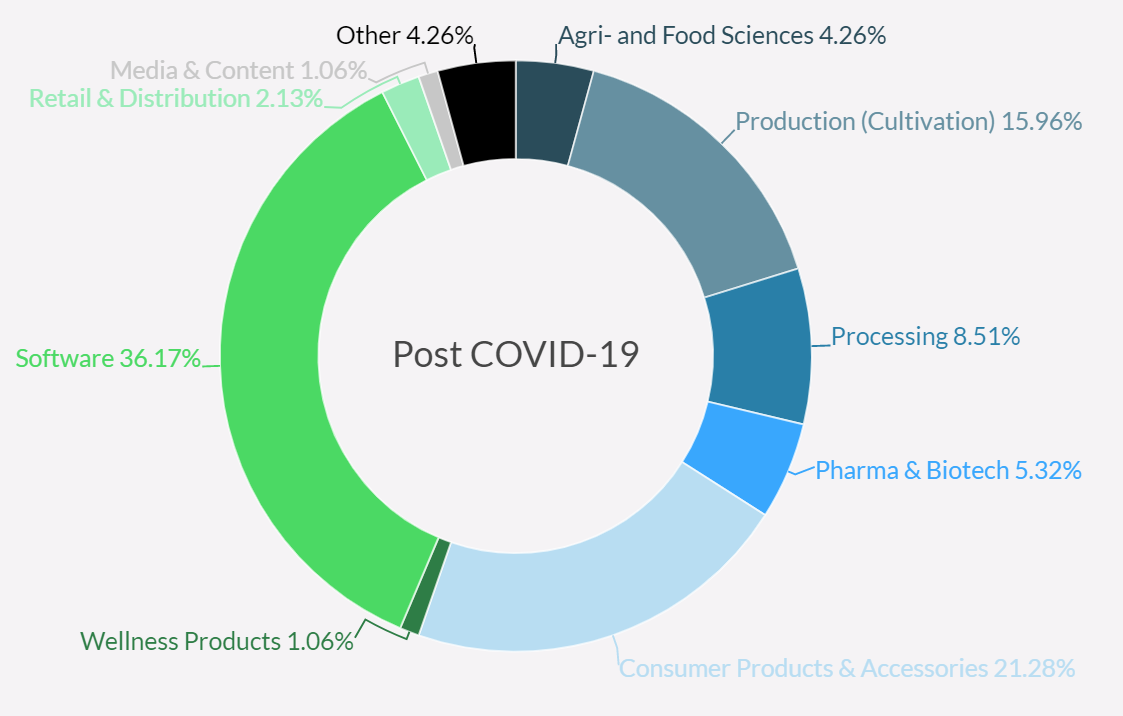 When looking around the market, the growing interest in technology startups is mounting. The FANG stocks, Facebook, Apple, Netflix and Google, have barely been affected by the pandemic. Though this may soon change, clearly many in the startup community are taking notice.

Another reason that these kinds of cannabis companies are flourishing has to do with the difficulty for cultivators to get a stamp of approval. Though virtual visits are becoming more and more popular, the EU-GMP certification process has been brought almost entirely to a halt.

As Strain Insider reported back in May, companies that have earned this certificate will enjoy an oligopoly until the audits resume.

Investing in the third wave of cannabis

The cannabis industry has grown in fits and starts. The most notable epoch came shortly after Canada legalised the recreational use of marijuana. Firms like Aphria and Canopy Growth, both of which had been highly active in the medical space, profited from the shift in regulations immensely.

However, for more than a year, these bullish trends have faded.

Related: The Effects of COVID-19 on the Medical Cannabis Industry

The bear market cannot be blamed on COVID-19 exclusively, either. In fact, during a time when most businesses were in lockdown, many states around the world identified cannabis dispensaries as ‘essential.’

There were also many innovations that will likely stick around long after the pandemic concludes. This may include curbside pickup, delivery services and other advantages.

For entrepreneurs, it is in these types of services that they will profit from. As mentioned above, purchasing hectares of land to grow your own cannabis plants isn’t good business.

But as the sector has evolved and competition upstream has become too fierce for new entrants, derivative services will become essential. As competent as Canadian cannabis companies are, it likely won’t serve their bottom line to try and compete at this level.

Put otherwise, the legacy thinking that huge grow sites will inevitably generate outsized returns is over. In the past, money sloshed around, and investors, usually with very little interest in cannabis, used base metrics to define success.

This strategy worked, but only because of the frothy nature of the market. It now appears that this kind of strategy no longer holds water.

In a May newsletter from Dutch medical growers, Bedrocan wrote the following:

‘In the end, it really did not matter if these investments made strategic sense or not, for the investors of these companies, the opportunistic hedge funds, were purely interested in executing a financial trade, normally with a retail investor at the very end, who had been led to believe that the cannabis hype was all worth it.’

Concluding, the cannabis market may have successfully shaken out the profiteers and grifters.

Although COVID-19 has accelerated the bearish trend, the entire sector has been dropping for the past 18 months. It’s still a minefield for investors, but identifying the companies who survived the boom and bust, enjoy liquid runways and have earned trust by playing by the rules is key for allocating capital.

Related: What to Consider Before You Invest in Cannabis Stocks

The cannabis industry is clearly here to stay, and, in its current mature form, hopefully, the third wave of investment can avoid the pitfalls of previous hedge funds.

The Legal Situation of Cannabis in Luxembourg

5 Tips to Interest the Press in Your Cannabis Business