Albania’s history is one that shows a country eager to emerge from an uncertain post-communist era. With these ambitions, especially those of pursuing a capitalist society, came a host of growing pains. From failed pyramid schemes and the influence of local and foreign chapters of the mafia to the widespread poverty of farmers, Albania holds a unique place for the European cannabis community.

Related: The History of Cannabis in Europe

And, as the country continues to supply the EU with much of its illicit cannabis, understanding this history is critical for understanding how Albania became the unofficial European capital for marijuana.

During its communist period, the country’s agricultural sector was highly-centralised and administrated by Albanian authorities. The dependence on farming remains a keystone of the country’s economy. According to a report spanning from 2015 to 2017, more than 20 percent of the country’s GDP is based on agriculture.

In the context of broader Europe, one of the very first farming territories was identified in Albania.

Archaeologists from the University of Cincinnati found traces of early agriculture ventures near the wetlands of Vashtëmi. This particular settlement in the southeastern part of Albania dates back to 6,500 BC. It wasn’t until 2012 that the researchers discovered the site, however.

At a time when the rest of Europe was hurdling towards collaborative methods in the field of science, anthropology and academia, Albania was still under the closed regime of communism. Susan Allen, the professor who led the dig, said that:

‘At that time (under communist leader Enver Hoxha), Albania was closed to outside collaborations and methodologies that were rapidly developing elsewhere in Europe, such as environmental archaeology and radiocarbon dating. The country began forming closer ties with the West following Hoxha’s death in 1985 and the fall of communism in 1989.’ 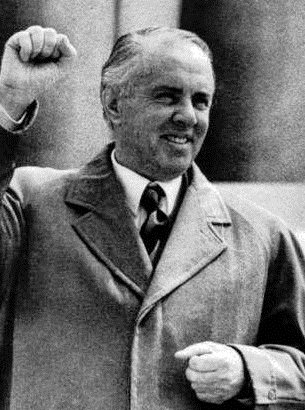 It is unclear whether hemp or cannabis plants were also grown at this time. Reports from around the fertile crescent of the Mediterranean indicate that many regions have been growing the crop for centuries. Due to the paranoia of Enver Hoxha, it has been difficult to unpack Albania’s farming history.

Related: The History of Cannabis Cultivation

Nonetheless, the country and its citizens have rested heavily on Albania’s rich natural resources for millennia.

It’s important to investigate a handful of features of Hoxha’s Stalinist regime and how the country fared during his rule. He came to power in 1946 under the political banner of the People’s Socialist Republic of Albania. Upon heading the country, Hoxha quickly distributed land from large owners to peasants according to the Agrarian Reform Law.

Later, in the 1950s, the various smaller landowners then pooled resources into larger collectives, all working for the state. This was just one effort from the government to centralise features of the country.

The agrarian reform thus turned a large swath of the population into critical members of the economy. Through this, Albania became self-sufficient and the quality of life improved relative to the period before Hoxha. These advantages came with a host of caveats, however.

Hoxha’s regime denied religion in all its forms and threatened those who tried to flee with capital punishment. In one cruel instance, it has been reported that attempted escapists were put on public display after the government had them executed. Slowly, but surely, Albania turned almost its entire focus on just a few national initiatives. Agricultural efforts became paramount to the existence of the country.

Another cost of such intense focus meant that Albania failed to industrialise at the same speed as the rest of the world. This oversight became abundantly clear once the country attempted to re-enter global politics after the death of Hoxha and the fall of the Berlin wall in the late 80s and early 90s.

There have been several countries that have shifted from communism to capitalism over the last 50 years. Many have managed this transition with relative grace. Others, like Albania, continue to struggle.

When Hoxha died, a power vacuum opened up, which ultimately led to country-wide protest. When the dust settled in 1992, many former communists had been expelled from government and replaced by the Democratic Party led by Sali Berisha. Despite the newly-elected president’s ambitions to modernise Albania, many of the changes did not take root.

It also became clear that Berisha was not immune to corruption after it was discovered that votes had been manipulated in the 1996 elections. Other unsavoury features of this time have become clear too. Pyramid schemes in which unwitting ‘investors’ were duped into handing over their life savings ran rampant.

Related: Expert Compares European Cannabis to Tech in the 90s

In 1993, the British publication the Independent reported a story in which a Ukrainian investor promising a hotel ended up running off with millions in funds. He ‘left an enormous hole in the ground in the centre of Tirana.’

Meanwhile, large crime organisations had already begun sowing the seeds of a highly-profitable cannabis industry in Albania. Farmers under extreme financial hardship turned to such organisations to help keep a roof over their heads. The exploitation has not been limited to cultivation either. Albania has record rates of human trafficking as well.

The broader political uncertainty prevented ample resources from flowing to this issue. Mafiosos from around the region have since capitalised on an unofficial ‘untouchable’ status in Albania. The country has also picked up the title of ‘Europe’s cannabis capital’ along the way. Even farmers are now working hard to protect this title.

According to reports from 2013, the cannabis industry in Albania rakes in over €5.5 billion per year. And cultivators, a demographic that includes grandmothers and school children, are defending these profits with their lives.

Gunfights with various authorities are not uncommon with one commissioner saying:

‘We were drawing indiscriminate fire from 20 positions, including heavy machine guns and anti-tank missiles. I saw a 70-year-old grandmother shooting at us with a heavy machine gun. I thought I was going to die.’

This particular event took place in Lazarat, a city in the south of Albania, the epicentre of the local cannabis market.

It has thus been a target for police forces throughout the Mediterranean. This is because much of the final cannabis product grown in Albania inevitably finds its way into the European Union. The Adriatic Sea has been the primary channel for this kind of distribution.

In developing a thriving cannabis network between Albania and the EU, cannabis king pings have drawn much attention. And as politicians’ interest in joining the European Blok grow, they have been working hard to oust such criminals. It is for this reason that gunfights like the ones mentioned above are pursued.

Lazaret’s marijuana industry has since been eviscerated with locals joking that it’s ‘the only place in Albania not growing cannabis.’ Still, many from Europe are unconvinced.

In 2019, a Western diplomat is quoted as saying:

‘It’s the Colombia of Europe. It’s the drug producer and distributor of Europe. It is a narco-state, and they’d lose too much money getting out of trafficking to get into the EU.’

Along with local officials, Italy has also been closely surveilling cannabis developments in the country. Due to its proximity, it is a major importer of Albanian cannabis. In a leaked police report from January 2020, it looks like this will continue to be the case too.

The Italian police indicated that cannabis cultivation in Albania increased by 1,200 percent in 2019.

Despite the military-style crackdowns on towns like Lazaret in 2014, it would appear that Albania’s cannabis culture continues to boom. The report adds that there are likely over 100,000 cannabis plants growing throughout the country.

This only adds further fuel preventing Albania from ever entering the European Union. At least until the EU changes its stance on cannabis.

The Story of Mexican Cannabis Cartels Begins in China