For many cannabis companies, the latest financial crash could not have come at a worse time.

The velocity and gradient at which global equity markets fell had not been felt since 2008. This drop reached epic proportions on March 9, 2020, as major exchanges like the New York Stock Exchange (NYSE) tripped first-level circuit breakers to bring a halt to an almost 200-point fall in the SPX index. Breakers were triggered again following a similar drop two days later.

Related: The Important Role of Cannabis in the 2020 US election

Firms, cannabis or otherwise, with large cash positions may be the only ones to survive. The only question now is, for how long?

Businesses around the world are still coming to grips with one of the fiercest market drops in over a decade.

Various headlines from notable financial publications reminisced on the similarities to 2008. The bearish assessment continues to roll in too as investors struggle to find shelter. Thus, it comes as no surprise to see central banks react accordingly.

On March 3, 2020, the United States Federal Reserve cut federal-funds rates by half a point, something that has not happened since market crises like those felt in 2001 and 2008. Jeremy Powell, the Chairman of the Federal Reserve, insisted such measures were necessary following the growing fears around the coronavirus.

A week later, however, it appeared that these fears were fully unleashed.

After oil negotiations between Russia and The Organisation of Petroleum Exporting Countries (OPEC) fell through, the price of oil took a steep drop. The unofficial head of OPEC, Saudi Arabia, cut its oil prices below Russian barrels as the two nations are engaged in an all-out price war, according to experts.

The effects of this face-off saw prices fall as low as those in 1991 during the Gulf War in the Middle East.

Already distressed by the uncontrolled outbreak of COVID-19, investors in other markets sold their holdings in droves. The hardest hit was the S&P 500, a bellwether for the American economy, as markets opened to a free fall on March 9, 2020. 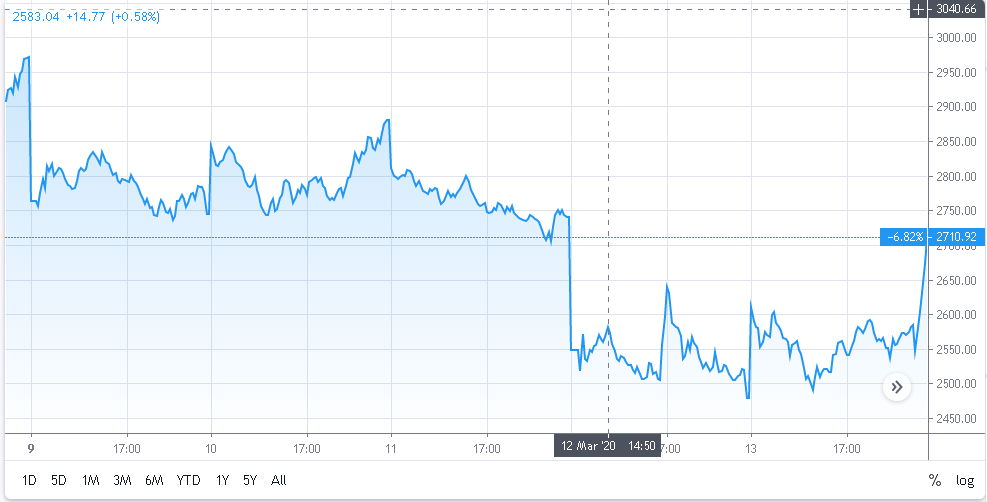 March 9 and March 11 both exhibited drastic falls in the American equities market. Volatile ups and downs have characterised trading since then.

The biggest winners in these events have been assets like cash and gold. Traditionally a shelter in times of duress, various gold providers enjoyed an unusual uptick on March 11, 2020.

Economies in Europe joined the fall, urging governments to take action. The German stock exchange (DAX) and the British Financial Times Stock Exchange (FTSE) 100 both dropped hundreds of points on March 9 and March 11 as well.

Equities markets in all major European economies have all slipped, and have yet to make up these losses at the time of press.

In the UK, this meant cutting rates, like the American central bank; also a stimulus package was added to help keep the British economy from slipping into a recession. The head of the Bank of England added that the economic impact of the coronavirus would be far less dramatic than the financial crisis.

Related: How Far is the UK from Legalising Marijuana?

For her part, Christine Lagard, President of the European Central Bank (ECB), confirmed that European leaders must act swiftly to avoid any 2008-like financial environments.

The North American Marijuana Index, a basket of cannabis stocks, including Aurora, Cronos, Canopy and many others, closely tracked other traditional markets during the market fall. For cannabis investors, however, this decline comes as no surprise. 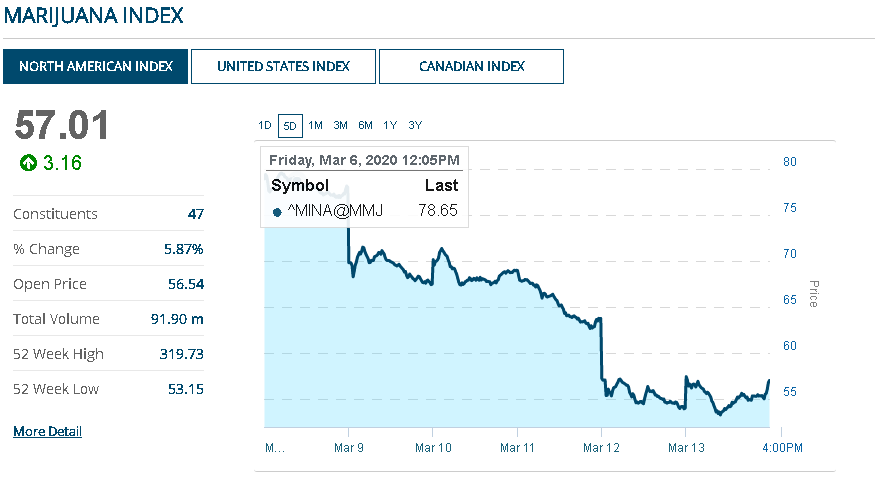 The steady decline of Canadian cannabis firms has been the major headline in the cannabis space for several months.

Reasons cited include the vaping crisis, supply issues and the slow rollout of ‘Cannabis 2.0’ in Canada. This no news, of course, and many firms have been making necessary adjustments over the past 18 months.

In February 2020, Aurora Cannabis Inc. executed a sweep of job cuts and a company-wide reorganisation as it braced for continuously dropped profits. Company executives explained that they wanted to firm up the business’s fundamentals as ‘the long-term opportunity for Aurora remains very compelling.’

It is unclear whether these changes included liquidating shares for cash to reach this long-term opportunity. A report from cannabis investment bank Ello Capital, however, confirms that many pot companies are in the midst of a cash crunch.

Bloomberg cited the report and added:

‘Aurora Cannabis Inc. is near the bottom of the pack and the worst-positioned Canadian producer with 2.3 months of liquidity, followed by Tilray Inc. with 3.7 months. Aurora said Thursday that it’s cutting 500 jobs as part of a major cost-reduction effort.’ 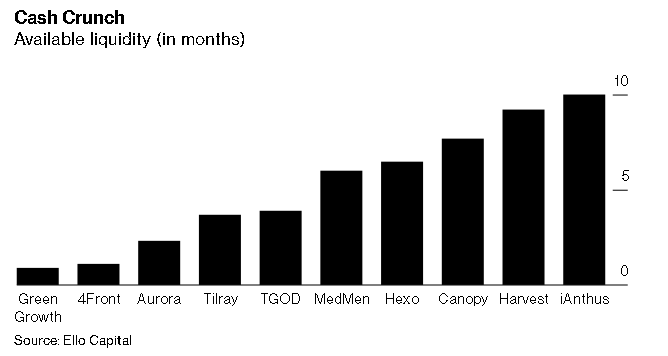 Coronavirus threats were barely on North America’s radar last month despite striking reports across Asia. Now that the virus. which causes severe flu-like symptoms, has been declared a pandemic, cannabis companies are extremely vulnerable.

First-degree fallout from the crisis will put a strain on cannabis suppliers. For growers, there already exist mask shortages for employees who are working directly with crops. Supply chains are also sure to be disrupted similarly to every industry in the economy. Specific to cannabis, BNN Bloomberg explained that nearly all hardware for vaping products is sourced in China.

Cannabis companies have already been experiencing supply shortages following extreme market demand, too. Tilray Inc. CEO, Brendan Kennedy, said that his company sold out ‘in six days’ after shipping to retailers in the Candian province of Alberta. Even strong businesses with attractive products are feeling the pinch.

It now appears that companies are vulnerable to both shuttering their operations, as well as consolidation.

Those who have escaped the cannabis market downturn, as well as the coronavirus fears, may be looking to deploy capital in discounted acquisitions. Reports, however, are indicating quite the opposite.

‘I don’t think you’re going to see M&A activity for the sake of it, just because companies are cheaper. There is too much growing capacity right now, so it does not make sense for everyone to start combining and merging.’

While it may be enticing, the markets, cannabis or otherwise, are far too volatile for any large plays. For amateur stock pickers, however, the rollercoaster markets may still offer a few windows of opportunity.

Shorting your way to profit

The intermediate trader is likely well aware of the importance of shorting. In the cannabis markets, especially those that have fallen since their initial rise in 2017 and 2018, this strategy has paid off well.

There are many tools through which traders and investors can short a down market. The primary asset, however, is called an ETF, or an exchange-traded fund. These are slices of funds that can be bought and sold on an exchange, much like a stock. It can be a basket of stocks, bonds or commodities.

Related: European Cannabis Stocks – What to Invest In

There also exist inverse ETFs, which generate profits for holders as markets descend. Inverse ETFs operate without the need for manual buying and selling. In cannabis, these products are quite popular due to the sector’s infamous volatility.

In 2018, for instance, Horizons ETFs, a Canadian investment firm, announced its application for three new ETFs. The president of Horizons ETFs, Steve Hawkins, cited growing interest from investors as the reason behind the proposals.

His firm’s applications are for leveraged ETFs, which expose investors to more risk, as well as reward, than traditional ETFs. An investor with limited capital may find such products interesting; instead of 1:1 returns, Horizons ETFs’ are tracking 2:1 and 3:1.

Hawkins told The Globe and Mail:

‘Given the underlying volatility of this sector we believe there is demand from Canadian investors to take on more risk using leveraged ETFs to attempt to generate potentially higher short-term returns very much like they have done with gold mining stocks.’

Now that these products are out in the wild, the returns in the latest bear market have been nothing to baulk at. Launched in May 2019, the ETF has boasted returns of more than 130 percent, according to investment guru Matthew Carr.

Horizons ETFs product, the BetaPro Marijuana Companies Inverse ETF (HMJI), has been on a tear since the end of February 2020. 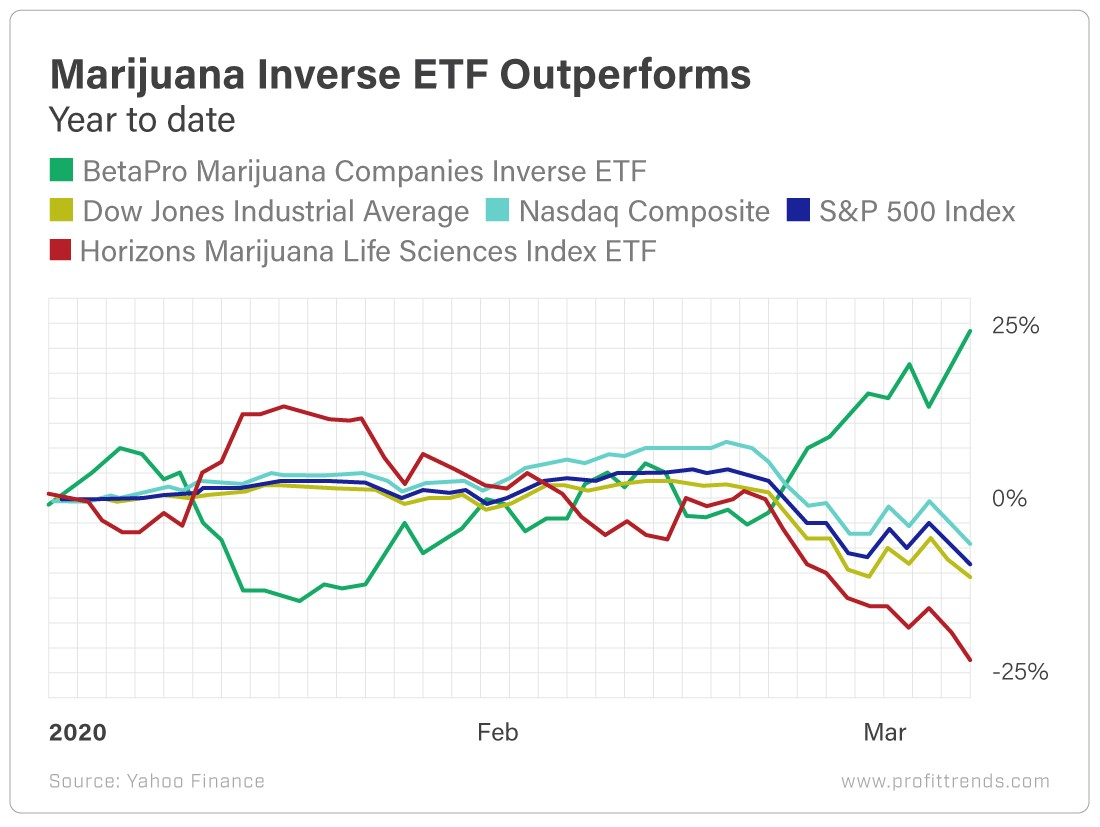 Turning all of this into actionable information for the layman investor is no easy task. But as stable markets like the S&P 500, DAX and the FTSE crumble under the weight of the coronavirus, expect cannabis to do much of the same.

Couple these fears with the ongoing liquidity crisis for many top pot firms and pessimists may see this market rout do a lot of damage.

Disclosure: This is not financial advice. The author does not hold any cannabis or cannabis-related financial vehicles at the time of press.

The 8 Best Cannabis Social Networks in 2020