In another study touting the benefits of legal cannabis to local communities, researchers at the University of Oklahoma have discovered something interesting. States in the U.S. that have legalised recreational cannabis actually enjoy higher real estate prices.

Related: In Latest Market Rout, Cannabis Industry Is No Shelter

As more data begins to trickle on, the advantages of legalisation are many-fold. But second-wave benefits, like improved corporate innovation, and now a stronger housing market, are certainly unexpected.

In the context of cannabis history, advocates from the 1970s could only dream of such a new discourse.

Regardless of one’s political agenda, money speaks volumes in the modern age.

This can clearly be seen in the tone and variety of discourse found within current debates on cannabis. Clever politicians cite an improved tax burden following legalisation. Others point to the revenues states enjoy after signing more amenable cannabis laws. Legal authorities have also highlighted the reduced costs on prison systems.

Indeed, the meme that cannabis is a green-gold mine has spread far and wide. In yet another investigation into this dialogue, a recent study indicates that the real estate market can also benefit. Using data collected from Zillow, an American real estate platform, researchers from the University of Oklahoma examined cannabis’ impact on communities in Washington State and Colorado.

For the uninitiated, these two states have been at the forefront of cannabis legalisation efforts, with Washington offering a bounty of data since legalising cannabis in 2012. Colorado legalised recreational cannabis in 2014. Both states have had the longest history and thus offer the most insight.

Related: California is Paving the Way for Global Cannabis Culture

The study first compares real estate buying activity between these two states with other states that have not legalised the plant. Researchers also look into how the location of a cannabis dispensary affects local real estate pricing. It reads: 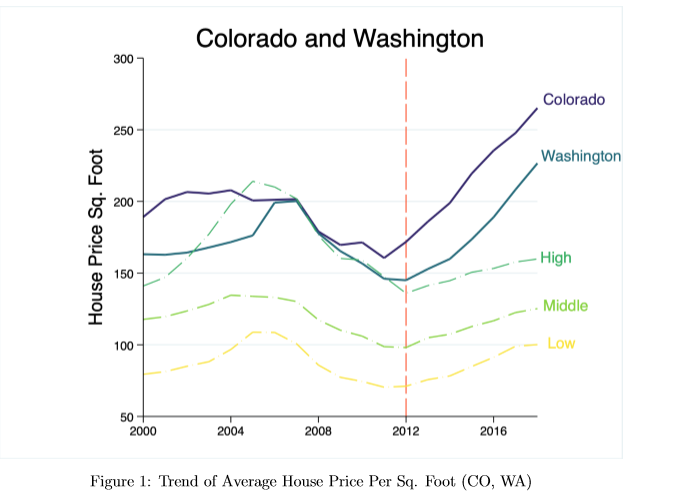 Though victories at the ballot box have positive effects on retail value, it isn’t until cannabis products are sold that more meaningful impacts are felt. This is because tax revenues, as just one example, cannot be calibrated until there is real economic activity happening.

Interestingly, data collected on large real estate transactions reveals that activity in this demographic is much quicker. One could reasonably infer that wealthier individuals typically react more quickly to changes in cannabis legislation.

The researchers offer other conclusions for this behaviour, but confirming such theses falls outside the scope of the study.

They indicate that wealthier individuals are able to react more quickly because they may have more liquid assets than other demographics. More liquidity allows this group to move to states with favourable cannabis laws faster. This is also assuming that these individuals also see the positive effects of such laws. Another thesis simply indicates that wealthier people can more quickly target capital when participating in a newly-liberated cannabis movement.

Related: Money Talks – How Much is Cannabis Legalisation Worth?

Another consideration that affects all demographics is the local school system. Typically, high-quality schools will affect housing prices in the area. If one examines how tax revenue is redistributed in Colorado, for instance, a percentage goes directly into education.

Between 2017 and 2018, the state dolled out nearly 75 percent of its Retail Marijuana Excise Tax revenue to public schools. The Colorado Department of Revenue reported: 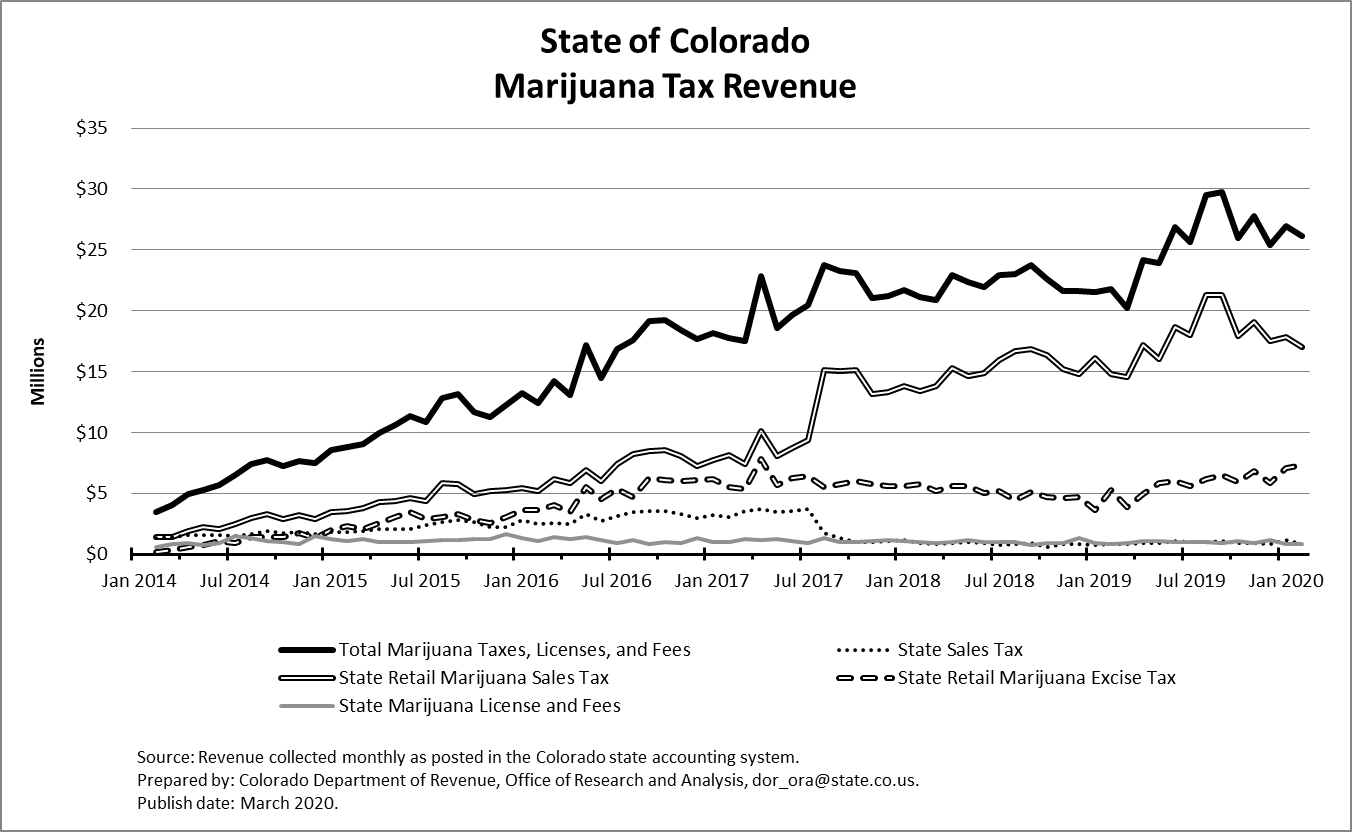 The paper from the University of Oklahoma then proceeds to outline the benefits for homes located near cannabis dispensaries. The researchers wrote:

‘In our application, homes which are within two miles of a dispensary at time t and have a second dispensary open within a half-mile of the home at time t+1 increase in value by over 6 percent. The price appreciates the closer to the new dispensary a home is, suggesting that the dispensary itself is a neighborhood amenity which has some positive value among home buyers.’

The paper’s findings ultimately highlight the benefit of new local businesses for local communities. While a taboo continues to exist for cannabis, the data suggests that this taboo is not influential enough to dissuade a real estate market.

But this hasn’t always been the case.

Examining the history of cannabis stigma

In a 2014 article from MarketWatch, the author collected feedback from real estate agents working within newly-legalised cannabis environments.

The commentary is far from positive, with warnings that realtors should even consider the potential of explosions. At the time, such explosions were not uncommon. This is due to the procedure for concentrating cannabis oil from the plant. It requires extractors to use butane, an extremely flammable gas.

‘I showed a house that was in a beautiful location on the Puget Sound [that] had been used for a grow operation. The plant just permeated everything in the house and it sat on the market for a very long time, despite its sweet location.’

These issues have also had an impact on commercial real estate. Due to the fact that cannabis laws are executed on a state-by-state level, the banking community, which refers to national regulations, have shied away from helping cannabis businesses.

Six years later, however, and the financial argument has helped many in the business community overcome these stigmas.

Data collected from the National Association of Realtors from Q3 of 2019 confirms much of the findings in the research from the University of Oklahoma. Its collection also includes findings from states that have legalised medical cannabis too. It writes:

The Association did, however, also cite a variety of concerns, including theft as well as the smell and humidity of cannabis operations and, of course, fire hazards. The odours, in particular, have made it incredibly difficult to resale a property used by cannabis businesses.

After passing new legislation that limited the number of plants a homeowner can grow on his or her property, real estate agents in Colorado have also reported an uptick in owners looking to sell. Such findings are disheartening for the cannabis enthusiast.

Related: The Important Role of Cannabis in the 2020 US election

But they also offer an opportunity for improvement for the crafty entrepreneur.

Much like the broader cannabis market, many of the ripple effects of the new industry are still unravelling. For the real estate sector, this is indeed the case. New data gathered on regions with favourable laws reveal rough but, nonetheless, positive effects on housing prices. Other reports from experts working in the field indicate that there are still some kinks that need to be ironed out, especially related to preventing odours and humidity.

Resolving these issues is still a work in progress, but if one examines the financial data, there’s a large bounty for an architecture or engineering firm that can resolve such issues.

Coronavirus Pandemic Could Delay Cannabis Legalisation in Europe and the US