The difficulty in identifying exactly how much money the Mexican drug cartels make from cannabis and other ventures lays in the fact that this money is undocumented. Only through estimations and successful drug raids can economists put a figure on all the black money these groups make. That being said, it isn’t difficult to see the effects these funds have on a community.

Interestingly, communities with a higher density of drug activity and cartel presence tend to also have higher literacy levels among the youth population. Members of the community also make statistically more money when living among cartels. And despite the missing tax revenue, one study found that ‘there is a positive link between cartel presence and [better] public services.’

Even more interesting is the story of how the Mexican drug cartels came to be.

Making sense of all the drug dollars

In 1998, the International Monetary Fund (IMF) estimated that the global illicit drug trade raked in roughly 2 to 5 percent of the globe’s gross domestic product (GDP). This was pinned down closer to 3.6 percent in 2009, which equates to about $2.9 trillion [~€2.6 trillion]. Of this, 70 percent is then laundered through traditional financial infrastructure. However, only a fifth of this is directly related to drug trafficking, according to the United Nations Office on Drugs and Crime in 2011.

Another study from 2014 indicates that cannabis, followed by cocaine and opiates, was the number one drug for the transnational drug trade. In total, Global Financial Integrity, a think tank working to stem the illicit laundering of money, estimates that the drug trade earns between $426 billion [~€386 billion] and $652 billion [~€591 billion] annually.

This makes it the most lucrative of all the transnational crimes.

Whole tomes have been written about the complexity of earmarking every dollar in the illicit drug trade. And from the brief outline above, all of this work is done via estimations. It’s incredibly difficult to pinpoint the exact figure. And many crafty politicians have used this to their advantage.

In 2019, for example, Republican Senator of Georgia, David Perdue, claimed that ‘the cartel business and the drug traffic just in Mexico alone coming across to the United States [is] bigger than Walmart.’ At that time, Walmart was one of the largest companies in the United States. Perdue placed this figure precisely at $500 billion. Later, the Washington Post outlined that the Senator’s statements were grossly overestimated.

Related: Money Talks – How Much is Cannabis Legalisation Worth?

It wrote that Perdue had cited figures for the global drug trade, rather than what the Mexican cartels had earned from cannabis, other drugs and through other ventures. An aide to Perdue later redacted a press release, but it’s clear that the senator was pursuing an agenda. Unfortunately, this wasn’t the first time such misinformation has been disseminated. In 2006, the White House Office of National Drug Control Policy announced that ‘Mexican traffickers’ earn ‘$8.5 billion [€7.71 billion]’ directly from ‘marijuana export sales’ to the United States.

‘There is no empirical justification for this figure that can be verified. Often, big numbers of dubious origin are tossed around in drug policy discussions with little thought and, frankly, little consequence.’

And now that cannabis is legal in many states in the U.S., these ‘big numbers of dubious origin’ are much, much smaller. But that doesn’t mean that one of the oldest businesses in the world is going under any time soon.

From seed to flower: the roots of the Mexican drug trade

In the 19th century, many Chinese emigrated to South America as they fled starvation and military conflict in mainland China. This made up what is now known as the Chinese diaspora and lasted into the 1950s. This movement of people from East to West was particularly important for the drug trade happening between South and North America too.

‘We study the historical origins and consequences of Mexican cartels. We first trace the location of current cartels to the location of Chinese migration at the beginning of the 20th century, and document that both events are strongly connected.’

Emigrants arrived in various South American countries with the sole ambition of moving to the United States. Economic prosperity in the country made it an attractive destination for many, not just Chinese emigrants. Eventually, the American government restricted emigration for this particular demographic.

The Chinese Exclusion Act of 1882 prohibited Chinese labourers from coming to the United States. This was previously very common during the American gold rush. 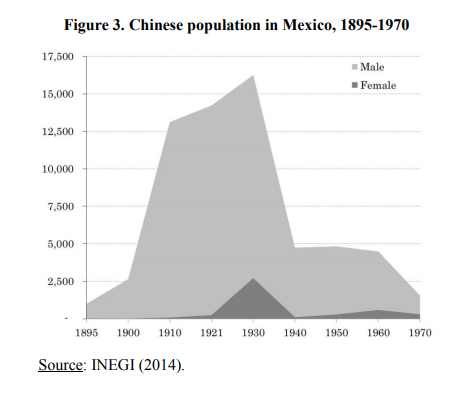 And as this law was never officially lifted, though heavily amended throughout its lifetime, until 1965, many emigrants ended up making Mexico their home. With this, Chinese know-how in the way of poppy seeds and ultimately, opium. The researchers write:

‘A crucial element is that opium was then the main “recreational” drug (outside alcohol and tobacco) consumed at the time, and its production and consumption was largely unregulated. Chinese migrants brought to the Americas with them the raw material (poppy seeds), the know-how on production and consumption (smoking), and their initial demand for opium, which was locally satisfied.’

This, plus the rise of human trafficking across the American border, gave Chinese emigrants a unique advantage at that time. The study concludes that areas where such activity concentrated during the late 19th and early 20th century are also ‘more likely to show some sort of cartel activity.’ 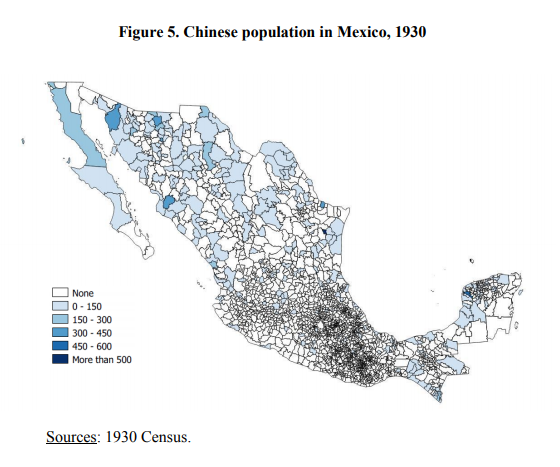 One can see from this diagram that the highest concentration of Chinese emigrants living in Mexico is in places located closest to the American border.

Although the concentration and dynamics have changed, the relationship between the Mexican cartels and China continues to evolve. This has been seen in the need for Chinese drugs to help support meth operations for the infamous Sinaloa Cartel. Formed in the 1980s, the gang’s base is in Culiacán in the state of Sinaloa.

Interestingly, Culiacán was also the city with one of the highest densities of Chinese emigrants in the 1930s. 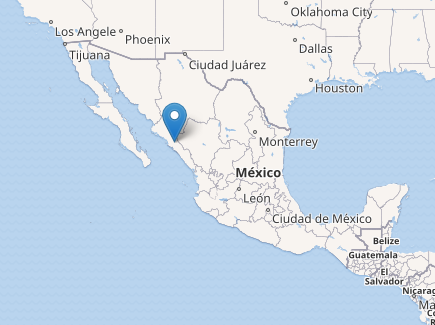 Compared to marijuana, cocaine or heroin, making meth is far less labour- and land-intensive. This, along with its incredibly addictive qualities, has turned the drug into a cornerstone of the illicit drug trade. And though the opiate crisis in the U.S. rages on, authorities have done a relatively good job of snuffing out small meth labs. This is in the part where modern China plays a hand in supplying the United States with meth and fentanyl.

Related: In a Post-Communist Albania, Cannabis Is King

Instead of growing and maintaining large poppy fields to source the base elements for certain drugs, the Sinaloa cartel is instead importing synthetic equivalents from China. When these synthetics are mixed together they produce a powerful and highly-dangerous drug with only minimal labour. President Donald Trump has, with unusual perception, identified the source of this supply chain.

In a G20 Summit in 2018, he demanded that China’s President crackdown on ‘fentanyl-like substances’ that make their way to the United States via Mexico.

The reality of the Chinese-Mexican connection comes to an even finer point amidst the coronavirus.

According to an article on March 25, 2020, from VICE News, the drug trade in Mexico is having to raise their prices due to supply issues in China. It reads:

‘The raw chemical ingredients used for manufacturing methamphetamine and fentanyl are mainly sourced from China, the epicentre of the outbreak. In a recent interview with VICE News, Jesús said his “cooks” were already running low on some of the essential materials used in the drug manufacturing process.’

Ultimately, this might be one of the greatest upsides of the latest coronavirus pandemic. It has stifled one of the most lucrative and deadly drug trades in the world. At the same time, the legalisation of cannabis in the United States and Canada continue to cut into cartel profits. And despite gross estimates, one can be sure that organised crime is not happy.

In a Post-Communist Albania, Cannabis Is King

How Technology Could Transform the Marijuana Markets in Europe